As seen on TNT & Showtime, Billings native Lukas Seely will appear at Big Sky’s Buck’s T-4 Lodge for an evening of comedy and cuisine. 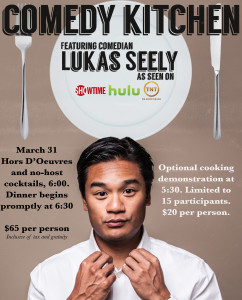 Comedian Lukas Seely will perform a comedy show and conduct a cooking demonstration at Big Sky’s Buck’s T-4 Lodge on March 31, 2015. Seely, from Los Angeles and a Billings native pairs his unique combination of comedy and compelling life stories with the culinary stylings of Chef/Owner Chuck Schommer and Executive Chef Scott Mechura. Lukas will also conduct a limited availability cooking demonstration featuring “Rodeo Ninja Noodles”; the dish he competed with in TNT and one of the evening’s courses.

Lukas started comedy back in his hometown of Billings, MT before relocating to Seattle,WA in 2004. Lukas soon became a crowd favorite in Seattle Comedy scene and had since moved to Los Angeles, California where he regularly performs at The Hollywood Improv, The Comedy Store and many other venues.
He was nominated as an Emerging Comic in the New York Underground Comedy Festival. Recently he opened for Bill Burr on the “Billy Red State Tour.” Lukas has also worked w/ such names as Dane Cook, Damon Wayans, Russell Peters, Bobby Lee, Sarah Silverman, Ron White, Greg Giraldo and Daniel Tosh, to name a few.
Lukas has performed his stand-up on FOX’s “Laughs,” and Showtime’s “Louie Anderson Presents”, currently on Hulu.com. His cooking skills were on display on TNT’s “On The Menu” with Emeril Lagasse.
Cost is $65 per person, inclusive of tax and gratuity. No-host bar and hors d’oeuvres at 6:00, dinner starts promptly at 6:30. Optional cooking class ($20 per person) starts in the Buck Ridge Room at 5:30.
Call 406-995-4111 for ticket information. All tickets are available on a “will call” basis. Pre-payment required, cancellation must be made no later than one week prior to the performance for refund.
2 Responces in Comedian Lukas Seely to Perform in Dinner Show March 31, 2015

i’m interested in joining a few friends who will be attending this cooking demonstration and dinner and wondered if you have one more ticket available? i can get you a credit card number asap. if that is possible, i’d like to join the reservation with trace klein, kristin hopkins-sigler and chris coppolillo.
my number is 406-539-5389
thank you!
kristin taylor

Did you end up going? What did you think, should we keep doing things like this?