Is Gluten Free A Trend? 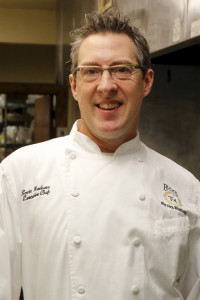 Over the last 30 years, from my days as a young cook to those as a chef, I’ve seen many food trends, innovations and movements. A few that come to mind are the popularity of Southwestern cuisine in the early ‘90s; the Atkins diet of limited carbohydrates; and the South Beach diet, which temporarily eliminates then slowly reintroduces carbohydrates while decreasing protein portions.

I see food trends come and go, and in chefs’ circles we often try to predict how long a particular trend will last. We usually all agree: not very long. And we’re usually right.

The gluten-free diet seems to be front and center as the current haute food trend. As a chef, I initially believed it to be just that, a trend. But maybe now it’s time to eat crow.

A couple years ago, my wife was suffering from what was eventually diagnosed as Hashimoto’s disease, which comes with a list of symptoms too long to mention. The first order of business from her naturopathic, or natural-path doctor, was to eliminate wheat – to “go gluten free.”

What a silly concept, my chef brain thought. Wheat, barley, and other grains are good for you, right? We have been eating them for 10,000 years. I played along however, wanting to support her, to eat like her so she felt more comfortable. “Who knows? I may even learn something,” I thought.

After about two weeks of eating gluten free, I remember one day telling her that I felt the same as before and that I thought it was all a bunch of “nonsense.” The naturopath told me to be patient, informing me it takes more like three to five weeks for gluten to leave your system.

Chefs are not known for patience. Besides, we know what is good, flavorful food and what is healthy. While I patiently adhered to my gluten-free diet for another two to three weeks, I was certain I’d be able to call out the naturopath and tell her it was still nonsense. But I couldn’t. I was more focused, I had more energy, and when I ate a fairly large meal after not eating all day (it’s a chef thing), I didn’t feel like I’d just consumed a bowling ball.

The truth is that while we have, in fact, been eating grains for 10,000 years, we didn't eat them for the previous 90,000 to 100,000 years. We began heavily modifying our wheat sometime in the 1960s to a point where our bodies barely recognize it, let alone are able to digest it. This brings us to where we are today: a society that suffers collective health challenges that were rare a few decades ago.

Over the years, I’ve dealt with many special requests and menu variances. Some still surprise me – I once had a dish sent back because the guest hated the color of the dish their entrée was plated on.

But as a chef, I would like to see the gluten-free diet take its rightful place among the dietary challenges we face today, such as tree nut and dairy allergies, and diabetes, to name a few. So don’t be afraid to ask for a gluten-free meal for fear you’ll be viewed as trendy. In the end, will a gluten free diet be only another passing fad? I certainly hope not.